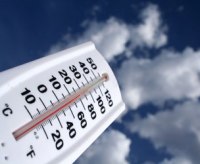 It should come as no surprise to anyone to hear that the concerns over ‘global warming’ continue to drive much of the medias attention, not to mention many column inches of digital and physical print.

However, despite the continuing slew of scientific data, it is often something very local which brings the situation into sharper focus.

The fact that temperatures have been rising over the past forty years is now largely undisputed. However, there is still some disagreement as to the extent of human responsibility for the  phenomena. Some (significantly few in number) scientists maintain that global warming has still to be proven. Others take a view that the human species is entirely responsible. A third group consider that cycles in climate change (periodic warming and cooling) are part of the natural cycle of the planet with the question being how much have we exacerbated the current warming cycle.

Whichever school of thought is correct, a walk through Warwick Gardens in south London earlier today produced two examples of the change being experienced in the area and the country more generally.

Whatever the cause, statistical analysis of the nearest weather station to the location (Greenwich) shows that the average winter temperature for the area has risen to somewhere between 7 and 8 degrees in the period 1980 to 2000.

This is an increase of some 2 degrees over the average temperature in the first quarter of the twentieth century. Undoubtedly physical factors such as greater housing stock, more concentrated heating play a part locally. However, this wouldn’t account for the similar rises seen across London and the southern parts of England.

Whatever the cause, it is difficult to expect such a change to have no impact on the local flaura and fauna. It was one of those changes I noticed earlier today.

Six months ago (how is that possible), I was lucky enough to spend Christmas and the New Year near Melbourne. One of the significant differences between Australlia and the UK being the indiginous wildlife. You can imagine my surprise when I heard a sound I had not heard since my visit. 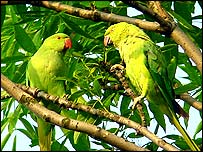 The persistent and chattering screeches I heard led me to two trees within the park where after some close examination, I found a group of green parrots. After a few minutes of observation, it was clear there were around 20 parrots actively defending an established territory.

These are certainly not native species but were thriving in south London. Of course, there have always been ‘lost’ parrots, parakeets or similar exotic species. However, I remember from childhood that these losses were exceptional with the expectation that the winter would kill off any birds remaining unfound.

It is certainly the case that more have been managing to survive the British winter. Indeed University of Oxford studies have shown that parrot populations in London have increased by nearly 30% per year over the past five years. Similarly, local BBC reports show an increasing number of established exotic parrot populations. One factor in this growth is the generally milder weather allowing increased numbers to successfully over winter.

The second indicator wasn’t the bird, but the trees in which they were found. London is often thought of as an urban jungle and in one sense it is. London is in fact the largest urban forest in the world with still over 40% of London being classed as open space of one kind or another.

When thinking of trees in London a few iconic species spring to mind, perhaps sycamore, oak, ash or lime trees. All have signficant representation across the city. Probably few people think of the less glamorous London Plane tree (Platanus x acerifolia). However, it is probable that this tree has had more impact than any other on life in London.

First identified as a natural hybrid in Vauxhall (southern London) in the 1600’s the first plantings were in the well to do areas of the time. Some amazing older specimens still exist in Berkely Square (although now long devoid of the anticipated nightingales).

However, the tree came into its own with the massive population growth in the capital during the 1850’s. The choice was not only for the shade the broad leafs gave, nor just for its ability to tolerate drought and water shortages. It was due to an ability of this amazing tree to act as a ‘green lung’ fighting the growing polution problem of the time.

Some particularly clever Victorians noticed the bark of the London Plane had a clever adaptation to survive in more poluted environments. Gradually, the polutants would be absorbed by the bark of the tree (left) which would become mottled with pieces shedding with the captured polutants to reveal new clean bark. This process continues for the lifetime of the tree. Many in London are now approaching 280 years of age and are showing no signs of slowing down their cleaning cycle.

However, as a relatively new hybrid, it appears that those warmer winters may also threatening a gradual decline in the species. The Forestry Commission and English Heritage report increasing infection by a fungus which has previously not been able to survive British winters and as a result didn’t get a hold of the London plane.

The prospect for this particular tree still looks relatively bright. Although the fungus is damaging it can be controlled if spotted early enough. The trick (according to the Forestry Commission) is to start looking for diseases that would previously be unheard of in the UK.

Whatever the truth of global warming and whether this has exacerbated climate change it is certain that changes are taking place now. It should be encumbant on all of us to look out for these. Whatever your view on the climate science, the speed of change is faster than many species can adapt to in the short term. I can’t help but wonder whether I should be pleased for spotting these two, or asking how many others must have passed me by unseen?