Around 18 months ago, my better half informed me that he was considering a local move to the Camberwell/Peckham borders in London. At this point, I should point out that better half is one of those peculiarly British references to a partner. Mine has already been thrown by being referred to as ‘he who must be obeyed’ (in homage to John Mortimer), him indoors and perhaps less flatteringly the Mem’ Sahib.

That aside, when I was shown the location of the new house, it was clearly on the Peckham side of the border – only just, but definitively in Peckham. For people of a certain age in the United Kingdom, mention of Peckham can mean only one thing a yellow three wheeler van run and owned by Trotters Independent Traders. The BBC sit-com Only Fools and Horses was set in Peckham which had otherwise escaped much of the nations attention. Following the exploits of Del Boy and Rodney Trotter and set in Nelson Mandella House, the series set the perception of Peckham for a generation of people growing up in the eighties and early nineties in the UK. Ironically, the overwhelming majority of the series was filmed over 80 miles away in Bristol, but this didn’t stop views of Peckham being shaped.

However, I was pleasantly surprised at the variety and friendliness of this southern London borough. It certainly has a great sense of community and an even stronger history. It was one of those bits of history that introduced me to the original Peckham trotters. 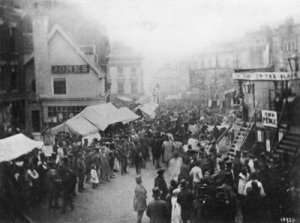 I’ve been lucky enough to have my border collie Taz with me on recent visits and became interested in the street names on his walk to and from the park. In addition, there seemed to be a huge number of references to birds, such as the Pelican estate, teal house, mallard court and the like – most strage.

This set me off on a bout of local history research on the area. The first surprise was the fact that Peckham was once renowned for it’s fair. Now we all need to eat something and what could be better and cheaper (given the fair was commonly known as the poor man’s promenade) than a slow cooked juicy and protein packed pigs foot – The trotters of Peckham, the snack for which the fair was renouned. I can’t help but wonder whether this fact was known to the script writers back in the 80’s or whether this was just the first of a number of coincidences persisting across the years.

It’s a common comment in Peckham to say the place is packed with lawyers and psychiatrists. It’s also said in slightly more hushed tones that most of the residents are mainly their clients. However, despite this I couldn’t see any evidence of legal or medical influences on the street names – just road names like Vestry and Grummant. 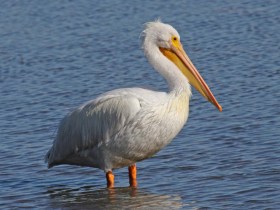 It was further research into the Peckham fair which started to explain some of the peculiarities.

In the late 1700’s and early 1800’s the fair needed to attract visitors. Some of the larger fairs had caged wild or exotic animals on display. Peckham not being able to afford anything so glamorous took some of the cast offs that had a habit of being aggressive towards the punters – two pelicans.

Land at Peckham was granted by the local church to the rear of the vestry to house and rear a further number of pelicans. These didn’t get any friendlier with breeding and so many of the locals were pecked and attacked by the birds, the local verger, a John Grummant bought the land and immediately rid the area of the offending birds.

However, this left the area with some facilities to rear livestock which local labourers quickly filled by raising ducks. Strangely most of the local poultry was fairly mundane but the Peckham breeders chose to specialise in teal ducks. The fact this is approximatey the time the majority of the teal duck on the Serpentine went walkabout is, I’m sure, pure coincidence.

Teal Ducks (Mallard on the right)

So, with a little digging the local landscape suddenly began to make so much more sense with very little effort on my part. The centuries dropped away and the development of the area became so much clearer. The land originally used to raise the pelicans is now occupied by the Pelican estate and the Peckham pelican cafe. This also explains the duck related fixation in naming the estate blocks teal, mallard and coot etc.

It’s strange how the smallest amount of information can explain the neighbourhood and make you see it in an entirely different light. The last of the ironies only became apparent today while I was researching some unrelated subjects. There on the page were references to Lords Lyndhurst, Denman, and Selborne, and to Mr. Justice Talfourd. The names of the roads I walked to take Taz to the park.

It turns out they were all law Lords in the 19th century. So perhaps the comment about Peckham being full of lawyers goes back further than I had imagined. One final thought. If I’ve managed to find this out about an area I’ve grown to appreciate and enjoy – what could you learn about your own area? You may never see the place in the same light again.