One of the complaints heard in the United Kingdom, especially from those living in and around Manchester is the taste of ‘Manc water’. For those who don’t live there, this is a reference to the rather strange and almost metallic taste of the city’s drinking water. This is far from unique in the country with some towns making a positive effort to grow their locations as spas. Cheltenham, Bath, Buxton, Leamington all have strongly flavoured naturally occurring mineral waters.

A similar phenomena can be observed in Sydney which I first encountered when sampling their drinking water. “Have they quite enough water in their chlorine supply?” I asked cheekily. The strength of chlorination is considerably higher than most other locations in both drinking and public bathing water. It was explained to me that this was due to an outbreak of Cryptosporidium and Giardia in the late 1990’s so the decision was made to increase the concentration of chlorine to effectively counter this. There has never been a matching decision to roll these levels back to more conventional concentrations, presumably as a preventative measure to minimise the risk of any recurrence. Needless to say, my intake of drinking water in Sydney was significantly reduced in favour of the potentially equally suspect bottled waters and soft drinks. I remember being struck with the force of the taxi driver’s insistence that I didn’t remove the luggage from the back of his car when we arrived, but had put this down to his eagerness to secure a tip. Instead, he pointed out that were I to injure myself whilst he was still ‘on hire’ I might make a claim against him or do ‘an insurance job’. I have travelled fairly extensively and even in litigious countries such as the United States, I hadn’t come across this previously.

However, a number of instances in Sydney made me wonder what on earth is going on in that city? At a restaurant my partner was served a rather mediocre and overly greasy plate of calamari. Not the end of the world but worth mentioning to the waitress when she asked if everything was alright with our meals.  However, far from doing anything constructive, she simply smiled said ‘Oh’ and cleared the starters away with a speed not seen before or since. Whilst paying the bill, the cashier read through my comment card and landed on the question asking ‘What could we do better’. I had replied with words to the effect that if a problem with a meal was pointed out by a customer, make some attempt to resolve the issue. Imagine my surprise when the cashier pointed out their training strictly prohibited such actions as it could lead to formal complaints and potentially legal action. – Had the world gone quite mad? Strangely, once this over-nannying tendency had been spotted, it appeared everywhere in the city. A shrine to the recent siege at the Lindt café had a two man council guard in place. This was despite the fact that the crown were managing themselves without assistance and behaving in an entirely appropriate and respectful manner. Hoardings on buildings under restoration stressed the importance on not walking within 11m of the building at any time as builders may be in the vicinity during the works. All in all it seemed that the precautionary principle was morphing into the preventative principle. I was already slightly perturbed by the message this sent about the public of Sydney and more importantly the perception of those in authority about Sydney’s residents apparent inability to exercise any degree of judgement. That was before the ‘joys’ of New Years Eve celebrations at Embarkation Park. An evening I will not forget but for not entirely positive reasons. 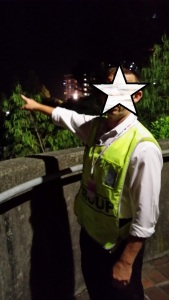 Go over there where you can’t see!

The venue was alcohol free (not a problem as I had no intention of drinking at the park) although there was a huge private security presence, plus police and an underlying assumption that there would be trouble. Having celebrated (peacefully and relatively soberly) in Paris, London, New York, Glasgow, Vancouver, and Madrid this level of security and presumed difficulty was new to me. If those other venues can manage without destroying the atmosphere what was sooo special about New Year here ? Suffice it to say the security staff (obscured here for purposes of anonymity) were unprepared, clearly new at the task, unprepared and happy only when you had been ushered to a location with no view of the celebrations. The rationale being ‘there might be a problem if everyone wanted to look at the display from here.’ The irony wasn’t lost on me but they appeared sincere if somewhat misguided. Similar restrictions were ‘imposed’ – don’t stand on the 16 inch wall as walls collapse, don’t stand against the railings, people get stuck in railings, don’t stop on the paved areas as they are used for people to get from point A to point B – it became something of a Kafkaesk joke and in my view reflected very badly on the city and it’s ability to manage events of this kind successfully. A local representative of the city council did listen politely to my concerns and assured me a full complaint and investigation would follow. She carefully took my details (well my name) but no means of getting back to me – so I won’t be holding my breath to hear the outcome of that particular debate. However, I did notice (cynic that I am) that the security staff worked tirelessly to clear areas with a view – strangely enough they kept them clear by assembling in them during the display and watching it on our behalf – very public spirited I thought. However, after a day or two to get over the disappointment and having struck Sydney off the New Years venues for the future I wondered why my experience of this city was so dominated by overwhelmingly unnecessary precautions.  It has been suggested that any unauthorised application of your own judgement or common sense is strictly prohibited. So whilst being the first to recognise the challenges of a city aspiring to host world class celebrations I wonder if quite such a heavy handed and pessimistically paternalistic approach is needed here and not in other cities around the world. I’m certainly glad I visited Sydney and other aspects of the city were incredibly enjoyable but I won’t be back in a hurry. For goodness sake give adults some credit for the considered choices they make and tone the protective tendencies down a notch or two.